Many of our area’s road runners have either met or heard of Paul Mbugua, the Kenyan distance runner who has called Upstate New York and the mid-Hudson Valley home for much of the past ten years. Throughout that decade, Paul has raced extensively and successfully in North America. In addition to victories in the Las Vegas International Marathon and Ottawa’s National Capital Half-Marathon, Paul has a long history of top performances in New York races such as the Kingston Classic, the Old Chatham 5K, the Corning Cup 10K, the Syracuse Festival of Races, the Chris Thater 5K, and the Utica Falling Leaves 5K.

Habitually cheerful and gregarious, Paul Mbugua’s appearances at these events have made him many friends in our area’s running community, and he’s now asking for help from some of those many friends. For several years, Paul Mbugua has been attempting to bring his wife and four children to the U.S. to live with him. As many of you have likely heard from other sources, law enforcement in many parts of Kenya is nearly non-existent. Paul’s wife and children have had their home invaded and robbed on more than one occasion, and Paul has long been eager be able to relocate them to the United States. After years of unsuccessful attempts to get visas granted to his family, Paul reports that his wife and four children have recently—finally—obtained visas to travel to the U.S.

The final remaining hurdle to Paul’s family’s escape from the dangers of everyday life in Kenya is a matter of finances. The Mbugua family doesn’t have enough money to purchase the airline tickets they need to use the visas they’ve been issued. Consequently, Paul Mbugua is asking friends and others to consider making a one-time donation to his family through the Adirondack Association of USATF.

Please note Paul Mbugua’s name in the memo section of your check payable to:

Board of Athletics, Adirondack Association, Inc.

If you can help, all six members of the Mbugua family will be very appreciative! 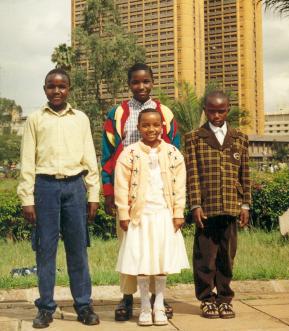